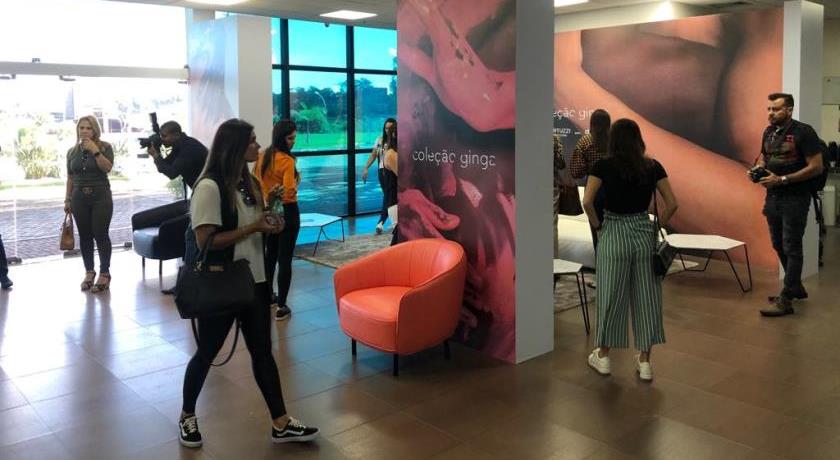 In Bahia, "Design na Pele" receives an excellent response from the Brazilian public

The release of Collezione Ginga Natuzzi Editions for DNP in Brazil was one of the principle highlights of the Natuzzi Congress in Salvador, Bahia. With an overwhelmingly positive return from investors, press, and partners of the Italian furniture company, the project showcased a preview of what Brazilian consumers — and consumers from around the world — can expect to see soon in stores everywhere. On August 14th there will be a special project in São Paulo during Design Week to present the Ginga Natuzzi Editions for DNP Collection. Afterwards the collection will be launched in seven Brazilian capitals and then head to Europe.

"Design na Pele” (DNP) created a collection of furniture uniting the work of three Brazilian tanneries and three design studios with that of Natuzzi Editions. The project is a part of Brazilian Leather — a Brazilian leather export initiative organized by the Centre for the Brazilian Tanning Industry (CICB) in partnership with the Brazilian Trade and Investment Promotion Agency (Apex-Brasil). In this edition, there is also the support of the Raiz project, aimed at the internationalization of furniture designers and conducted by the Furniture Industry Union of Bento Gonçalves (Sindmóveis) in partnership with Apex-Brasil.

According to Marcos Rogério Collet, Natuzzi product director in Brazil: "Brazilian design has already been recognized internationally for a long time in the world. But it lacked a project that really pushed it out there. Now, this step of putting the proposal of the national design in Natuzzi breaks a paradigm that existed and opens doors for new products, both for Natuzzi Editions and Natuzzi Italy. Sofas, armchairs, and tables make up the collection, whose development was guided by the valorization of leather (with tanneries Gobba Leather, Minuano and Luiz Fuga), together with the creativity of Brazilian designers, in addition to the quality and tradition of Natuzzi Editions.

Take a look at the launch schedule for the Collezione Ginga Natuzzi Editions for DNP in Brazil. Other than São Paulo, the remaining dates have yet to be defined.

About Brazilian Leather - As a leather sector internationalization project, Brazilian Leather is conducted by the Centre for the Brazilian Tanning Industry(CICB) in partnership with Apex-Brasil (the Brazilian Trade and Investment Promotion Agency). There are numerous strategies for consolidating national leathers and hides in foreign markets - encouraging the participation of tanneries in the principle global trade fairs and business missions focused on closer relations between Brazilian suppliers and buyers from other countries are but two of them. More information at www.brazilianleather.com.br