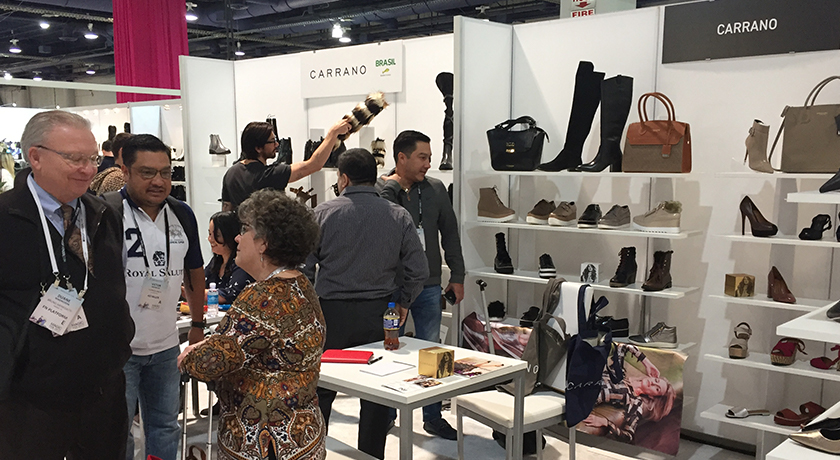 Art and design, leather and footwear. An extensive and detailed work combining these four elements has been stimulated in Brazil throughout 2016 thanks to project Design na Pele. Now, the surprising result will be premiered at FN PLATFORM in Las Vegas, between February 21st and 23rd, with the exhibition of the DNP capsule collection by Brazilian fashion brands Guilhermina and Kildare.

In the occasion of the launching, a special reception will be held at the Cosmo lounge (on the 22nd at 4:30pm). The collection will also be highlighted in the project Brazilian Footwear space (stand 80500), as well as at Guilhermina’s exclusive stand (81207) and through the distribution of a magazine detailing the project.

Through Design na Pele, special collections were created for each one of the participating brands. They all have leather as the unifying element. Celebrated Brazilian designers – such as Ronaldo Fraga for Kildare and Patrícia Viera for Guilhermina – have created unique leather articles next to traditional Brazilian tanneries. From then on, they went to develop collections of shoes that value the skin, the design, the quality and innovation of leather made in Brazil.

The result is outstanding: every single model created brings with it a fragment of the Brazilian culture, collaborative design and a true combination of the Brazilian production chain. FN PLATFORM and its visitors will have unique access to this work full of details, new approaches and ideas for the leather and footwear industries.

Where to find the articles developed by project Design na Pele at FN PLATFORM:

During the entire event

During the entire event

The collection: the partnership between two references within the women’s segment gave birth to a collection guided by femininity. Lightness, embroidered leathers, laser effects, mosaics, and handmade applications are collection’s highlights.

The collection: Kildare is a traditional Brazilian men’s footwear brand. Ronaldo Fraga’s proposal for Design na Pele was to bring new colors and formats, promoting a mix between the brand’s classic style and the urban aesthetic of skateboarding. Soft and canvas looking leathers were used to achieve the innovative results that will be premiered at Platform.

Celebrated as one of the world’s most innovative projects within the international leather industry, Design na Pele had two previous editions (2013 and 2015) promoted in a singular dynamic: unique leather articles were developed by Brazilian designers next to local tanneries. From that first stage on, surprising products were developed for the fashion and home segments, but for non-commercial purposes. The articles made up a series of itinerant exhibitions presented in Hong Kong, Milan, São Paulo, among other influential cities.

In its third edition, initiated in 2016, Design na Pele has innovated once again by developing a collection of products that combine creativity with industrial excellence, this time focused on sale. Besides Guilhermina and Kildare, a collection of furniture created by an unprecedented partnership between Brazilian designers and local tanneries will also be launched in the near future. The initiative has the support from the Furniture Industry Association of Bento Gonçalves (Sindmóveis).